THE GRAND PRIX OF SOUTH AMERICA 2023

In 1948 the Ford V8 was the car making all the  running. Fangio in his Chevrolet Master was in the top five but was chasing Oscar Galvez’s Ford which was a front runner all the way swapping stage wins with his brother Juan in a similar car.

Fangio, meanwhile was heading towards disaster on Stage 7, but before that we was to win stage 5 from La Paz to Arequipa. At the same time a real Knight of the Road was emerging in the form of Eusabio Marcilla who was dubbed El Caballero del Camino for his selfless acts of rescuing competitors when they got into trouble on the road.

He was the person who came to the aid of Fangio on the 1322km Stage 7 when his car slipped off the edge and disappeared down a 200 metre drop.  Marcilla was in contention all the way and would probably have had a top two or three finish if he had ignored the plight of his fellow competitors.

With Juan and Oscar Galvez now clear of their main rivals they continued to swap stages through Tumbes, Quito, Pasto, Cali, Bogota, Cucuta and Valera before the final run into Caracas.

But drama was unfolding as the cars sped towards the finishing line. Juan Galvez was involved in an accident on the last stage leaving the prize open to his brother only for him to breakdown within sight of the finishing line. As he was pushing the car towards the chequered flag a spectator joined in which resulted in this being classified as  receiving outside assistance and a disqualification!

The spoils then when to the surprised Domingo  Marimon, nicknamed Toscanito, because of his habit of  always smoking a Tuscan cigar. He had driven a steady race and was rewarded for his cautious approach.

It is still regarded as the greatest road race ever and one that deserves to be
re-run in cars of the period.

In 2023 we will celebrate the 75th anniversary of this event with a the second The Grand Prix of South America which follows the original route where possible. Where the roads are new we find the old and where they have been covered in tarmac we look for dirt.

This competitive event will start at midnight in Buenos Aires (just as the original event did) and will run north to Salta and into Bolivia. Once over the border we cross the high plains to the great salt flats at Uyuni. The roads we select are very much the same as they were in 1948 when the cars scrabbled over the gravel on these challenging stages.

From Bolivia the route is modified to run to Cusco along Lake Titicaca, then through the Andes before dropping down to a welcome regroup in Trujillo.

After Trujillo we are once again on the historic route with minor changes to ensure we find some of the more interesting roads and stages. We enter Ecuador just after Tumbes which saw Fangio crash out in 1948.

After Quito we enter Colombia for four intensive days of driving before arriving for a heroes’ welcome in Cartagena, the finale of the Grand Prix of South America 2023. 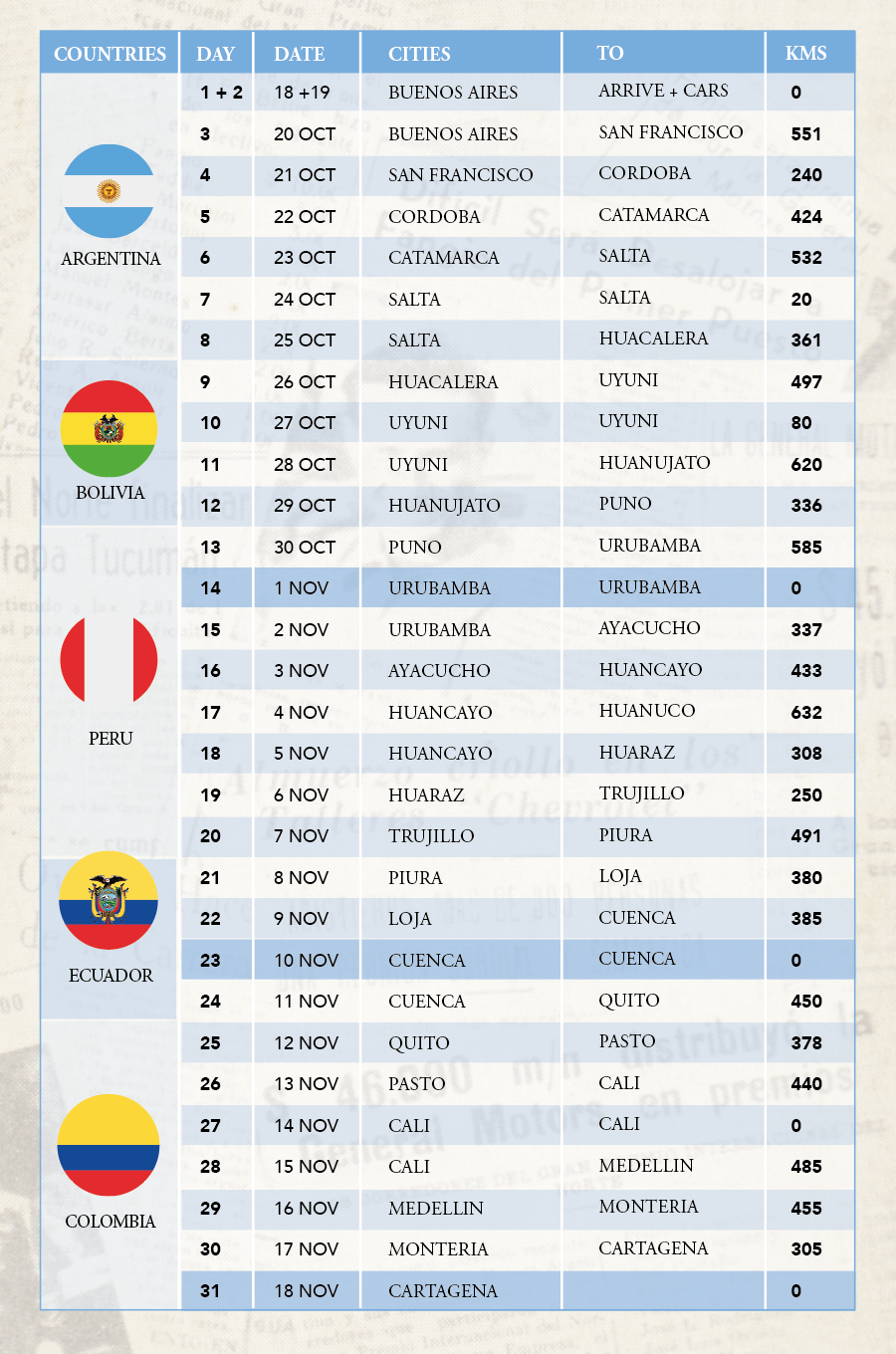 Accommodation
Each night you will have hotel accommodation with breakfast included. Most evening meals are also included.

Back-up
We aim to keep man and machine together so provide basic mechanical first aid as well as a medic for those little ailments. If you require servicing and comprehensive mechanical back up we strongly suggest you bring your own or share a mechanics van.

Vehicles
All roads have been recced and the route is completely open. However, many roads are graded rather than tarmac – this can vary from very slow and rough to fast and flowing dirt. With this in mind we suggest you prepare your car carefully in order to reach the end of the event successfully. In the Touring class we accept 4x4s.

Climate
It goes without saying that although we are going at the best time of year, it is still a hot and sticky environment and you should be prepared for rain, heat and dust.

“The genius of Slartibartfast is that it combines an eight day rally through the whole of Scandinavia with a luxury six day cruise and tour along the Atlantic coast of Norway; it takes you as far east as Egypt and further north than Alaska.”