After breakfast at the Grand Udawalawe Safari Resort we visited the Elephant Transit home which was very close to our hotel. This is a sanctuary for orphaned elephants   There are approximately 6000 elephants in Sri Lanka and as many as 300 are injured every year in road or rail accidents. If found in time they are brought to this home where they are cared for before releasing them back into the wild.

We arrived in time for feeding, the elephant calves are given milk through a funnel and a long hose. After their milk they then strip the leaves off the branches that have been laid out for them. One older elephant being cared for at the home had had a leg amputated and was wearing a prosthetic.

After the Elephant Transit Home we were on the road again heading to Haputule, 143Km away. Our planned lunch stop was in Rakwana at a Muslim guest house opposite the Mosque. Roy our guide had arranged this with a local family who cooked us a typical Sinhalese meal made with fresh locally sourced ingredients and was enjoyed by all.

After lunch we headed north, climbing the hills towards the centre of the island. The roads were very, twisty and in some places, narrow and steep, special attention had to be paid to the oncoming lorries and buses which were passed with mere inches to spare.

The landscape in the centre of the island is very tropical and lush and we had our first sighting of the tea plantations. Plenty more to come.

Our hotel, Akway, is down a very steep slope and clings to the side of the mountain at about 3000 feet. The views from the hotel are magnificent but very hazy. Pimms was served on the terrace of the hotel and we toasted in the Chinese New Year. 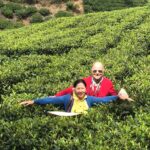 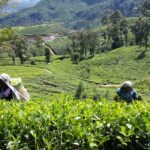 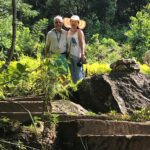 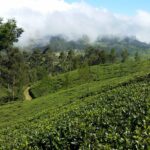